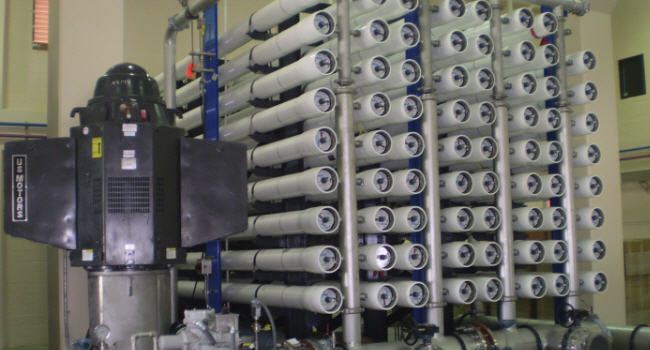 Every aspect of a reverse osmosis (RO) membrane operation requires some degree of process math. Changes in operating conditions that may be considered minor can actually have significant and detrimental effects on system performance. This is certainly the case when calculating system recovery rates, and the subsequent changes in concentration factors, in RO plant operation.

The function of both RO and nanofiltration (NF) membranes is to reject dissolved ions (salts). RO membranes reject all ions at some percentage while NF rejects primarily divalent ions such as calcium and sulfate. The industry commonly refers to NF as a “softening membrane” meaning that it more readily rejects calcium and magnesium. NF does not require the higher net driving pressures necessary for RO operation, making NF a more economic alternative when primarily divalent ion removal is required.

Both RO and NF processes involve the separation of the incoming raw water into two streams, permeate and concentrate. As the feedwater passes through the membranes, pressure drives a relatively high percentage of water molecules through the membrane barrier to produce a low-salinity permeate stream while leaving a lower percentage of water behind in a higher-salinity concentrate stream. A process challenge in successful membrane system operation is maintaining a balance between the desired permeate volume and a sufficient concentrate volume to keep sparingly soluble salts in solution.

Published rejection rates of today’s RO membranes exceed 99 percent, which means that the majority of the feedwater salts are rejected by the membrane and pass into the concentrate stream. As operators increase system recovery to produce more permeate, they effectively remove water from the feed stream, leaving less water to dilute the increasingly higher concentration of salts. When the solubility limits are exceeded, the salts fall out of solution and combine to form scale foulants on the membrane surface. Common scale formers in membrane applications include calcium carbonate, calcium sulfate, barium sulfate, and strontium sulfate.

Finding the proper balance between acceptable permeate production and reduced membrane fouling is crucial, and why the process math is so important. RO and NF system recovery rates are calculated based on the amount of permeate produced divided by the total amount of raw water fed to the train. This calculation is illustrated as Qp ÷ Qf. and described below:

When salt solubility limits are a concern, the concentration factor must be considered. Most brackish water RO and NF systems operate at recovery rates between 75 and 85 percent, with the limitations based on salt concentrations in the brine stream. Using the example above, 250,000 gallons of concentrate will have a concentration factor of four (4).

One way to illustrate recovery rates and explain concentration factor is to gather 10 one-liter bottles of water and 10 stones to represent salt in the visualization. To illustrate 80 percent recovery, separate eight bottles and drop five stones in each of the remaining two bottles. The eight bottles represent 80 percent permeate and the two remaining bottles represent 20 percent concentrate. Each of the concentrate bottles has five times more salt than the original feed. Repeat the exercise, this time separating nine bottles and putting all of the stones in the remaining tenth bottle. At 90 percent recovery, the stones representing salt have been concentrated 10 times.

Understanding the influence of sparingly soluble salts on recovery rates is critical for successful RO plant operation. Dissolved solids must be diluted using conducive recovery rates or dispersed or inhibited with chemical pretreatment in order to sustain desirable system performance. Ionic salts will dissociate in water to ionic species called cations (positive ions) and anions (negative ions). However, the reaction is reversible and when the ion concentrations exceed saturation limits, the salts can drop out of solution and become a solid. The resulting scale will foul membrane surfaces, impeding permeate flow and increasing the total dissolved solids (TDS) content in the permeate stream. Scale fouling of feed channel spacers (vexar) restricts water passage through the membranes and forces operators to increase feed pressures to maintain acceptable permeate volumes. This increases energy costs and reduces system efficiency.

Understanding the formula and the crucial relationship between concentration factors and RO system recovery will help plant personnel operate more efficiently and within system design limits. Even seemingly nominal changes in system recovery rates can have significant impacts on the salt concentration factor and result in scale formation and subsequent membrane fouling. Any potential change to operating conditions should be fully considered, and initiated incrementally with a complete understanding of all potential consequences.

Harold Fravel accepted the position of Executive Director for the American Membrane Technology Association (AMTA) after working for Dow Chemical /FilmTec Corporation for 36 years. He has a PhD in Organic Chemistry from the University of North Carolina and a BS in Chemistry from Florida State University. He resides in Jupiter, FL.